* The Boeing company scored a hit with its "707" four-engine jetliner, and a bigger hit with the smaller trijet "727". In the 1980s, Boeing introduced a replacement for the 727, the "757", which wouldn't prove quite as successful but was a still a good earner for the company. This document provides a history and description of the Boeing 757. A list of illustration credits is included at the end.

* In the 1970s, Boeing considered development a modernized and stretched variant of the 727 trijet, to be designated the "727-300". However, the energy crisis of the 1970s intruded on the design process, with Boeing engineers finding that greater fuel efficiency dictated a new-design aircraft that only retained the six-across fuselage configuration of the 727.

The six-across seating configuration seemed a bit archaic to many industry observers, the trend at the time being towards "wide body" jetliners, but airlines liked it for short-haul flights, and it was more fuel-efficient. To obtain still greater fuel efficiency for the "7N7", as it was known at the time, Boeing engineers investigated improved aerodynamics and sought more efficient engines. The 727's JT8Ds turbofans had been state-of-the-art in the early 1960s, but they were "low bypass" engines, with a low ratio of airflow through the fan relative to the airflow through the turbine core, and so not very efficient. In the 1970s "high bypass" engines were available that had much higher bypass ratios and greater efficiency; indeed, Boeing had a selection of attractive powerplants.

By 1978, the "757", as it had officially become known, had emerged as a twin-engine jetliner with a low-mounted swept wing, a high-bypass turbofan being mounted under each wing. Although a tee tail had been retained well into the design process, a conventional tail arrangement was chosen instead, since it provided better stall handling. The "glass cockpit" arrangement of the larger 767 jetliner, then in development, was adopted for the 757. In fact, the same cockpit design was used for both aircraft, which was why the two aircraft looked so similar in the nose; 767 aircrew had to step up to get into the cockpit, while 757 aircrew had to step down. The 757 also made extensive use of improved alloys and composite materials to reduce empty weight. 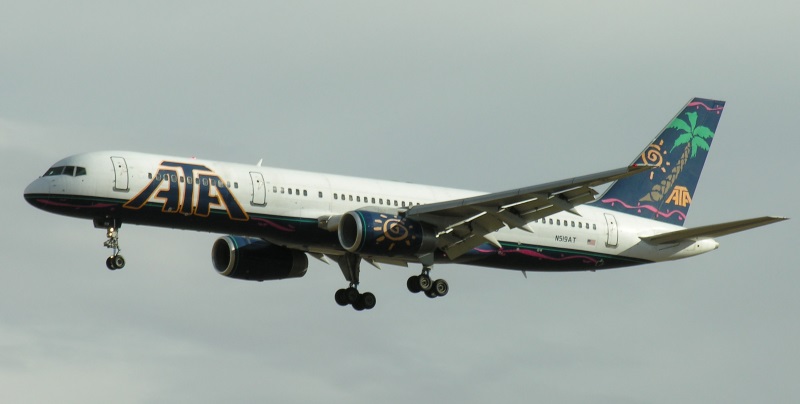 The 757's airfoil design also leveraged off the 767, though the sweep was more moderate -- 25 degrees at quarter-chord for the 757, like the sweep of the Boeing 737 wing, opposed to the 31.5 degree sweep of the 767. The 757's wings had a dihedral of 5 degrees and an angle of incidence of 3.2 degrees. The 757 wing was less efficient in cruise flight, but more efficient in takeoff / ascent and landing / descent; since the 757 was a short-haul aircraft, it spent less time in cruise flight and so the wing sweep was an appropriate trade-off. The wings were typically "busy" in good Boeing jetliner fashion, each wing featuring:

The tail arrangement was conventional; the tailplane had elevators but also variable incidence to help with flight trim. Each main landing gear assembly had four wheels in a 2x2 bogie configuration, hinging from the wings to retract into the fuselage, and was fitted with carbon brakes. The nose gear had two wheels and retracted forward.

Avionics included radios, transponder, navigation and landing aids, plus a weather radar; as mentioned, the 757 had a leading-edge glass cockpit. Another leading-edge feature of the avionics system was the "Engine Indication & Crew Alerting System (EICAS)", a diagnostic system that tracked the condition of the aircraft and alerted the aircrew if it found anything wrong. Yet another was a Honeywell "inertial reference system (IRS)" based on ring laser gyros incorporated into the navigation system.

* A "757-200PF" package freighter was introduced in 1987 for United Parcel Service, featuring a large cargo door on the forward left side of the fuselage -- with the same dimensions as that of the 727 -- but no passenger capability nor windows. It could carry up to 16 pallets or containers in the main deck, as well as cargo in the two underfloor cargo holds. Maximum cargo load was just under 40 tonnes (44 tons). It was a popular item; from 2001, a fair number of 757-200 jetliners were converted to a similar configuration, the "757-200SF", or "special freighter". 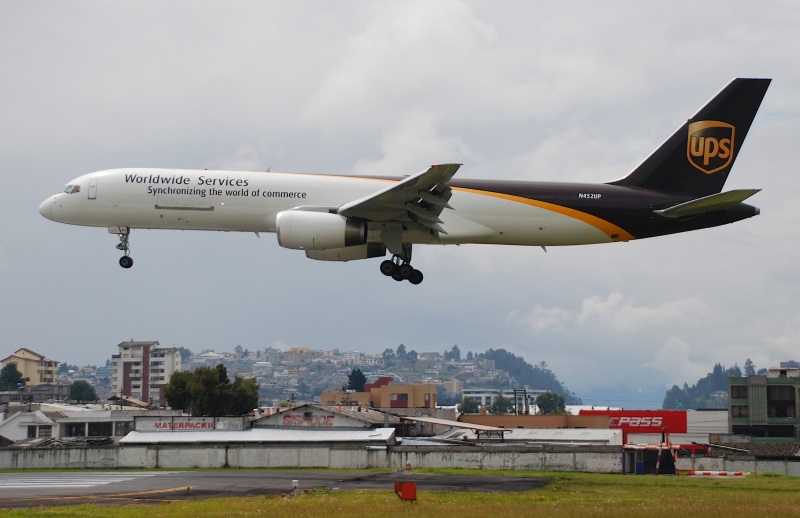 A "combi" version of the 757, the "757-200M", was introduced in 1988, with the cargo door, but also retaining passenger capability. It could handle two to four cargo pallets in the forward section, and carry 123 to 148 passengers in the rear. Only one was built, for Royal Nepal Airlines, this machine being fitted with more powerful RB.211-535E4 engines to support "hot & high" operations.

Executive / VIP configurations were sold under the designation of "77-52". VIP users included the presidents of Argentina and Mexico, as well as the Sultan of Brunei.

* Demand for a 757 variant with more capacity led to the stretched "757-300", with the initial flight of the first prototype on 2 August 1998. The 757-300 had fuselage plugs fore and aft of the wings, the fore plug having a length of 4.06 meters (13 feet 4 inches) and the aft plug having a length of 3.05 meters (10 feet), giving a total length of 54.43 meters (178 feet 7 inches). Empty weight went up to 64,950 kilograms (142,400 pounds); maximum passenger capacity was 289 seats in a single-class configuration, or a more reasonable 240 seats in a three-class configuration. Cabin accommodations were redesigned, the new arrangement being taken from the Boeing 737 Next Generation series. Like the 757-200, the 757-300 featured two passenger doors forward of the wing and one near the tail on each side of the aircraft, but featured both an emergency exit behind the wing and two emergency exits on top of the wing on each side -- for a total of twelve doors.

The 757-300 went into service in 1999, but by that time the 757 program was reaching the end of the line. Sales finally went too soft to support further production, and the last 757, a 757-200, was delivered in 2005. Only 55 757-300 jetliners were built; a total of 1,050 757s, including the initial prototype, had been delivered to end of production. Sales were apparently somewhat below expectations -- not because of any real failing of the aircraft, just because competition was tough.

Boeing is currently working towards a "New Midsize Airplane (NMA)", essentially a replacement for the 757, being sized along the lines of the 757-300 -- though it will have two aisles instead of one, being a short wide-body aircraft. It will be a new design, though leveraging off other modern Boeing jetliners like the 787. Current considerations are of 225-seat NMA-6X and 275-seat NMA-7X configurations, the NMA-7X to be the first to fly, with initial deliveries scheduled in 2025. Digital design systems are being used to ensure that development goes smoothly. However, the 2020 COVID-19 pandemic threw the air travel industry into disarray, so plans may well change.

The 757 remains in widespread service. From 2010, several firms have offered aftermarket conversions of 757-200 jetliners to a combi configuration, typically carrying up to ten cargo pallets forward, with seating for 45 to 58 passengers in the rear. These conversions were usually intended to carry personnel along with the heavy gear they were to operate to remote locations. Two combi conversions were also acquired by the Royal New Zealand Air Force, for use in freight, passenger, VIP transport, or medical evacuation roles.

However, for the time being, the 757 also remains useful as a passenger liner, with a number of users updating their machines to modern interior fits, including items such as LED lighting, plus wi-fi and comsat connectivity. From 2012, Boeing teamed with Rockwell Collins to provide a modernized glass cockpit for 757s (and 767s) in service, replacing the old CRTs with flat panels and incorporating modern electronics. Given the increasing costs of fuel in the 21st century, a number of airlines have chosen to fit winglets to their machines to improve fuel economy. 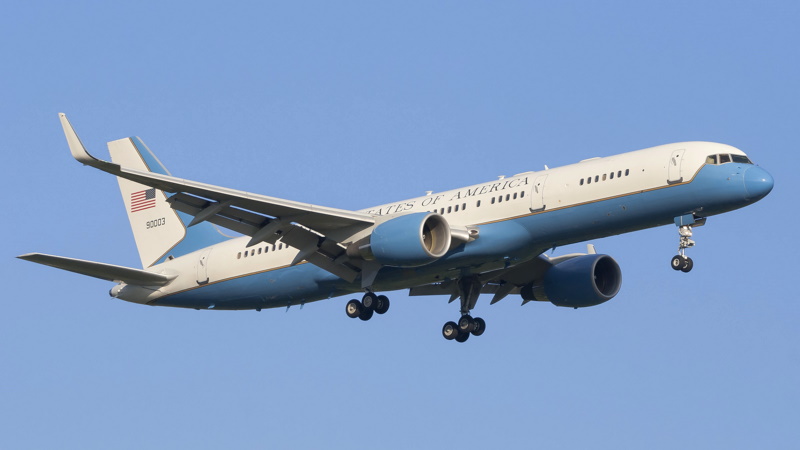 * The US government obtained a number of 757s, flying them under the designation of "C-32". Four 757-200s were obtained in 1998 and 1999 as government executive transports, being designated "C-32" and painted in white and blue "presidential flight" colors; they are used to carry the vice-president and other high government officials, flying out of Andrews Air Force Base in Maryland. They feature a litter of antennas to support an extensive suite of communications gear, and they were all eventually refitted with winglets. It is said that the high-perched landing gear of the 757 is regarded as a plus for VIP flight missions, because security personnel can see underneath it so easily. These aircraft have VIP accommodations, of course, and it seems likely they have defensive countermeasures systems -- though details are unclear. 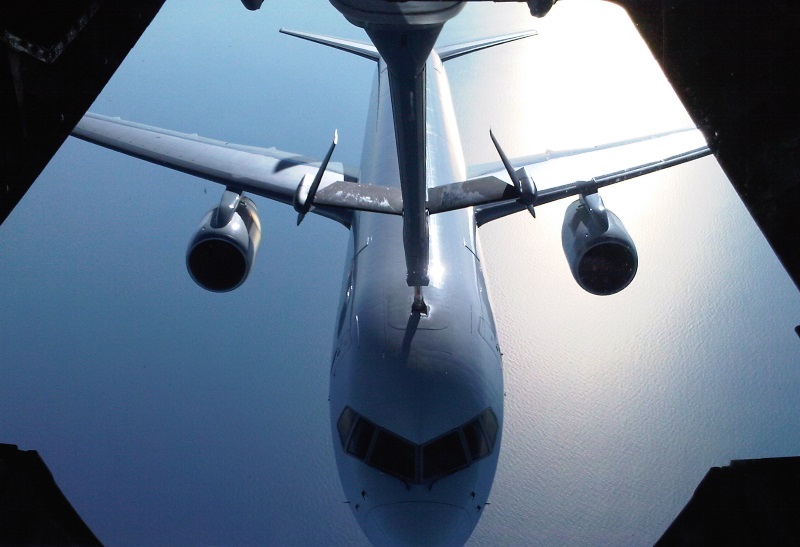 The C-32As are well understood compared to their "C-32B" brethren. Two were obtained originally, with two more acquired later, all being refitted from used commercial machines. They are painted white all over, with unobtrusive national markings, and according to the story, they are used by the US government's "Foreign Emergency Support Team (FEST)", an inter-agency quick-response task force mostly intended to deal with terrorist actions. The C-32Bs don't have the same litter of antennas as the C-32As; there's not much data on their equipment fit, but it is clear that they were fitted with an inflight boom refueling socket behind the cockpit, photos and videos showing them tanking up in midair. Nobody's talking about any other specifics of these aircraft. 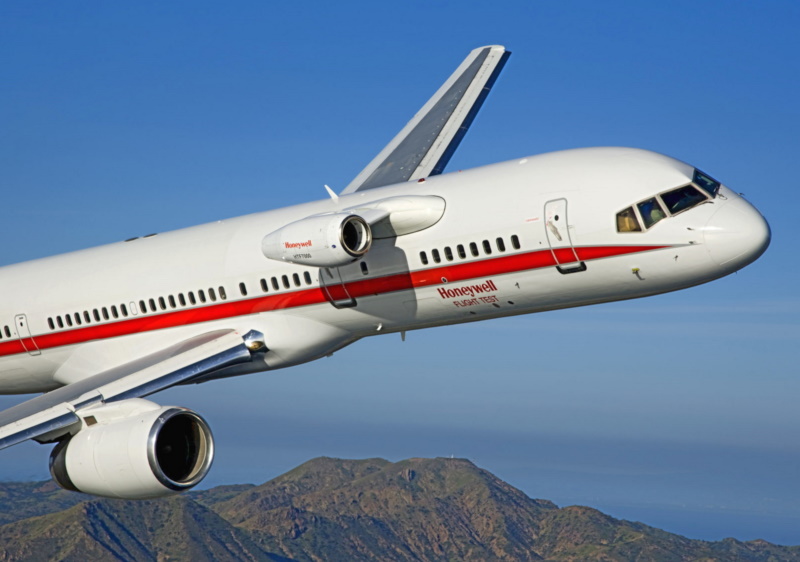 * The 757 has also been used as a trials machine. Boeing retained the original 757-200 prototype as a trials platform for the F-22 Raptor fighter, with the jetliner fitted with a "pointy nose" and a wing mounted on top of the aircraft behind the cockpit. Initial flight of the "Catfish", as it was known for its cluttered appearance, was in 1999; current status of this machine is unknown, but it was observed in operation as recently as 2010. Honeywell operates a 757-200 as a small turbofan testbed, with the engine unconventionally fitted to a pylon extending from the aircraft's upper forward right fuselage. It made its first flight in its new form in 2008.

Several editions of JANE'S ALL THE WORLD'S AIRCRAFT were consulted as well, and the online Wikipedia also proved useful, in particular for links.