* In the the postwar period, the Beech Aircraft Company of Wichita, Kansas, scored a hit with its single-engine "Model 35 Bonanza" light civil aircraft. Following up the success of the Bonanza, the company designed a twin-engine machine, the "Model 50 Twin Bonanza" -- which proved popular, with the US Army obtaining it in numbers as the "L-23 Seminole". The Twin Bonanza was updated with a more capacious fuselage as the "Queen Air", the ancestor of the Beech King Air twin family. This document provides a history and description of the Twin Bonanza and Queen Air. A list of illustration credits is given at the end. 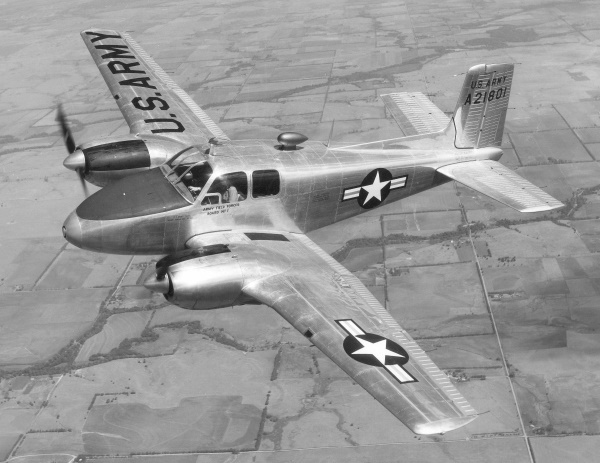 * The success of the Beech Bonanza led the Beech company to consider a bigger and more capable follow-on, with the first flight of the Model 50 Twin Bonanza prototype on 15 November 1948. The development program had been very rapid, with chief designer Ralph Harmon having presented the concept to company chief executive Walter Beech only a little over seven months before.

The Twin Bonanza name would prove, in hindsight, somewhat misleading. It might have been better applied to the Beech Travel Air, introduced in 1958 -- the Travel Air later evolving into the Beech Baron -- which had more the look of a twin-engine Bonanza, with about two-thirds the empty weight of the Twin Bonanza. 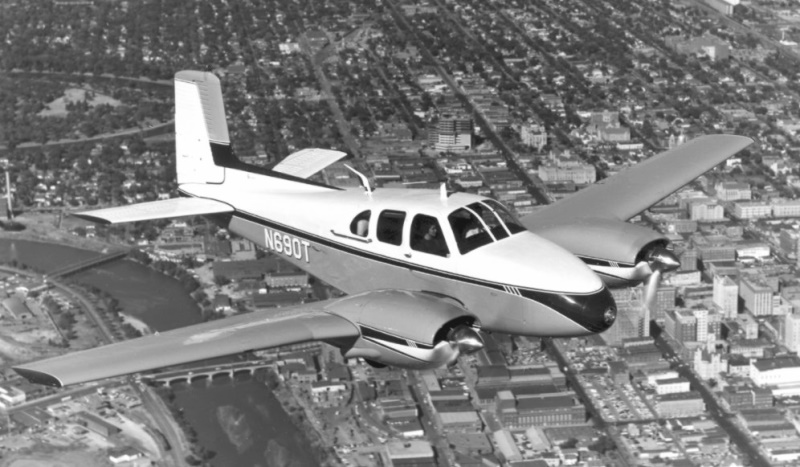 It was supposed to have been powered by supercharged Franklin engines, but they never materialized, Franklin having decided to get out of the aircraft engine business. As a result, the engine cowlings were roomy, which turned out to make maintenance easier -- though they contributed to drag. They provided a recognition feature, modern Beech twins more typically having the flattened nacelles characteristic of horizontal-opposed air-cooled engines.

Handling was said to be excellent. The Twin Bonanza cabin was about 30 centimeters (a foot) wider than that of the Bonanza; in effect, the Bonanza had been "stretched" horizontally, split and then spliced down the centerline. The Twin Bonanza could carry six, on fore and aft bench seats. The widened fuselage meant that the windshield had three panels -- not two as in the early Travel Airs, which later went to a single panel -- providing a recognition feature. Access to the interior was via a single door on the right side of the fuselage, with pull-down steps to assist entry. The door scheme was in fact inherited from the Bonanza. There was a baggage hold in the rear of the cockpit, with an access door on the right.

Field of view from the cockpit was excellent. The aircraft was flown with a single yoke control; like the Bonanza, the yoke could be pivoted from one seat to the next, with the pilot able to transfer control to a copilot in the middle seat. The side window arrangement was also based on that of the Bonanza, with two windows on each side of the fuselage.

All landing gear had single wheels. The nose gear retracted to the rear; the main gear retracted forward, the wheels being left partly exposed -- a feature inherited from the Beech Model 18, which provided some protection in case of a wheels-up landing. It was designed with ruggedness in mind, Beech having an eye towards US Army interest in a light twin aircraft. The military would be impressed; military twin Bonanzas are discussed below. 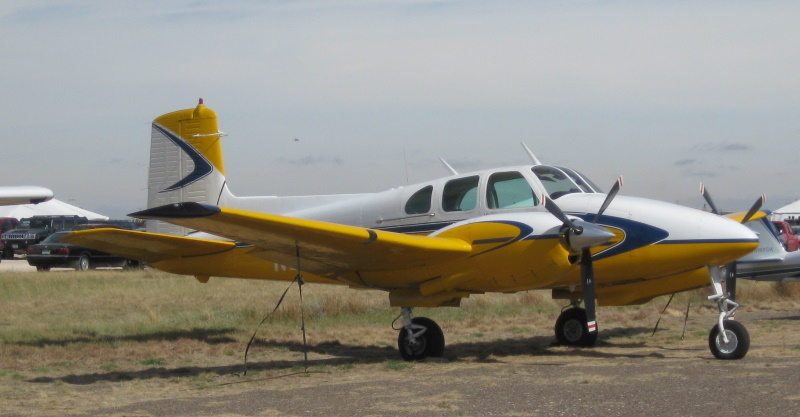 Only 13 Model 50s were built, including 6 for the US Army. The Model 50 was followed by improved variants:

The "Twin Bo" or "T-Bone", as it was nicknamed, was sturdy, and the type had a long operational life, with some still flying today. Upgrades have been offered for the Twin Bonanza, including such as new interiors and improved avionics.

The Excalibur Aviation Company offered a re-engining program in which Twin Bonanzas were upgraded Avco Lycoming IO-720-A1A flat-eight engines with 300 kW (400 HP) each. The flat-six engines had proven temperamental, requiring a degree of careful babying to operate reliably. The Lycoming engines were fitted in new cowlings that looked more appropriate to a flat engine, giving these "Excalibur 800" upgrades a distinct recognition feature.

* The Beech company, it appears at least partly in response to prodding by the Army, decided to take the Twin Bonanza and give it a more capacious fuselage, with the first flight of the "Model 65 Queen Air" on 28 August 1958, with entry to service in 1960.

The new, roomier fuselage typically accommodated five passenger seats, or four in an executive configuration; the "Airliner" configuration offered seven passenger seats, plus two folding seats, and an additional passenger window on each side. There was a hinge-down airstair door on the left rear fuselage. Powerplants were twin Lycoming IGSO-480-A1B6 flat-six engines with 245 kW (340 HP) each. Along with standard avionics, an autopilot and weather radar could be obtained as options. 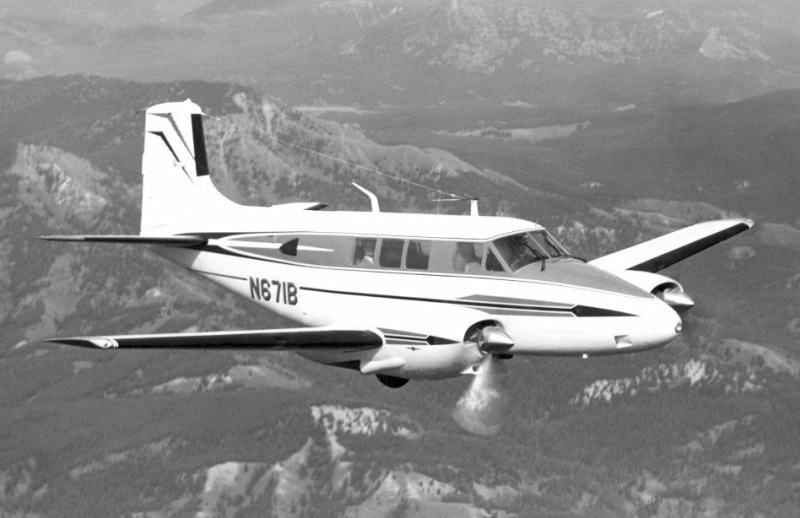 A pressurized version, the "Model 88", featuring round instead of square passenger windows, was introduced in 1965; it was the only model of the Queen Air with the porthole windows. The Model 88 was followed in turn in 1966 by the "Model B80", which was much the same as the A80, but had higher MTO. The B80 was the definitive Queen Air, being the most heavily produced variant.

A "Model A65" was then introduced in 1967, this being a Model 65 with more fuel and the swept tail. Some were produced with double doors for cargo loading. The Model A65 was followed in 1968 by the "Model 70", which was again much the same, except for use of the extended A80 wing.

* As noted above, the Twin Bonanza was designed with an eye to military sales, and was evaluated by the US Army early on. The demonstration had an accident that turned out to be anything but unfortunate: a demonstration of take-off and landing on a constricted airfield at Fort Bragg, North Carolina, didn't go so well, with the pilot stalling the machine on approach. It pancaked into the field, bending it substantially -- but the crew walked off, shaken but unharmed. Ralph Harmon thought that would be curtains, but the Army brass in attendance were very impressed. The Twin Bonanza was repaired, with Harmon flying it back to Wichita. 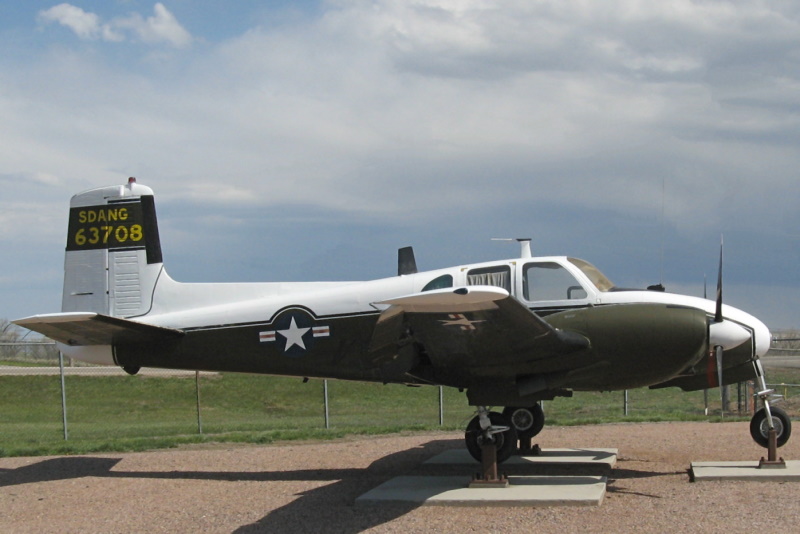 They were followed by 40 "L-23B" aircraft, then 100 of the definitive "L-23D" variant, with L-23A/B survivors updated to L-23D spec. The last Twin Bonanzas obtained by the Army in utility configuration were six "L-23E" machines. When the US armed services went to a common designation scheme in 1962, the L-23D and L-23E became the "U-8D" and "U-8E" respectively. It is not exactly clear what the correspondence is between Beech Twin Bonanza models and their military designations, but it appears the two more or less tracked each other:

The "more or less" qualification is important, however, since there may have overlap, and of course the military aircraft had some differences in interiors and avionics from the civil machines.

There was a single "XL-23C" obtained by the US Air Force, used for trials -- one involving external fuel tanks connected to the wingtips by wing extensions. 29 L-23Ds were converted to "RL-23D" -- from 1962, the "RU-8D" -- configuration, with 11 new-build RU-8Ds obtained as well. They were battlefield surveillance platforms, with variable configurations:

Machines with the AN/APS-85 SLAR were also fitted with AN/AVB-50 weather radar in a drum nose fairing. It seems a number of U-8s -- not just the RU-8Ds -- were alternatively fitted with a much less obtrusive weather radar in the nose, only noticeable via a small cooling intake near the tip. It is not clear if civilian Twin Bonanzas flew with weather radars. 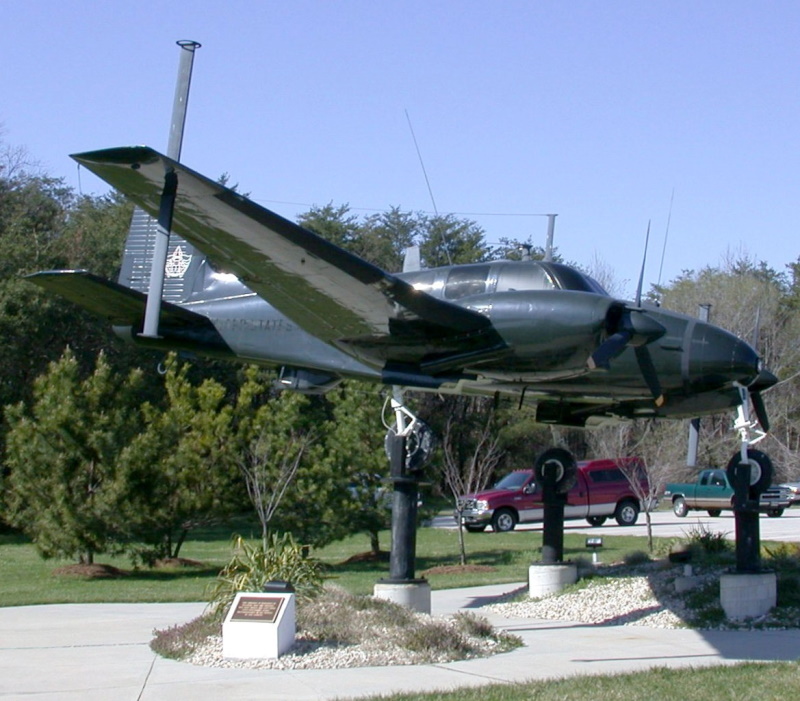 The Army didn't buy any more Queen Airs, and the type was an "also-ran" in Army service; it wasn't seen as a bad idea, it was just that the Army preferred turboprop propulsion. According, Beech fitted a Model 65 with twin Pratt & Whitney PT6A-6 turboprop engines providing 375 kW (500 HP) each.

Identified initially by the company as the Model 65-90T Queen Air, this was evaluated by the US Army, from 17 March 1964, as the "NU-8F". It was effectively the first of the Beech "King Air" machines, with the Army acquiring the type as the "U-21A Ute" -- but that is another story.

* As concerns copyrights and permissions for this document, all illustrations and images credited to me are public domain. I reserve all rights to my writings. However, if anyone does want to make use of my writings, just contact me, and we can chat about it. I'm lenient in giving permissions, usually on the basis of being properly credited. 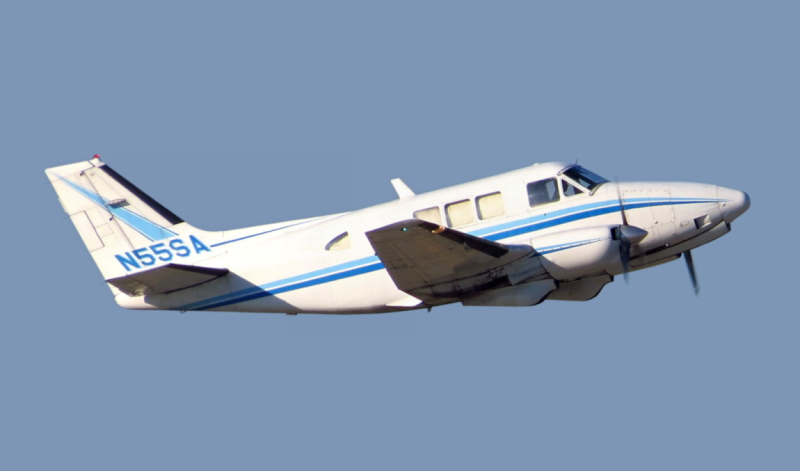 There's not much data available on Beech aircraft, so this article had to leverage off Wikipedia, and such information as I could glean from JANE'S ALL THE WORLD'S AIRCRAFT, and air encyclopedias.